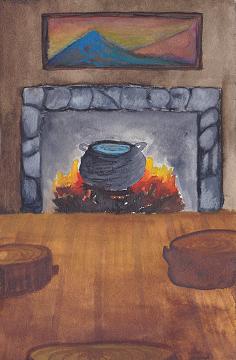 “Moss and cedar bark for The Ancestors…” the old man sang as he dropped a little quantity of those elements into the cauldron. The cauldron puffed a little steam that set up the whole atmosphere of the room. Something changed then, something subtle, although Ilan didn’t have words to describe it. “Come here Ilan, look into this, what do you see?” he said. Ilan was sitting on a log, like Dolkar was, and looked at the boy first and smiled letting the boy know that she wasn’t sure what was going on. “Come, don’t be afraid Ilan,” he repeated “I know you’re going to like this.”

Then she got up and walked towards the old man who was standing by the cauldron whilst Tenzin followed her all the way staying very close, also looking intrigued.

“Are you ready to cross to the Other Side?” he asked.

“The…? The what?” she muttered shyly. “Oh wait…I know, it’s one of those tricks again…”

“Hahaha, tricks…yes… if you prefer to see it that way.” he answered. “Now look into the cauldron, Ilan, and tell me what you see…”

Ilan inclined herself to look inside the cauldron, but the bubbling liquid didn’t look anything like the other side… wait…

“I see the… I see stars… planets…galaxies… is that the Universe, Yarlung???!!!” Ilan was so absorbed into the sight that she didn’t realize she was actually being absorbed literally into the cauldron. 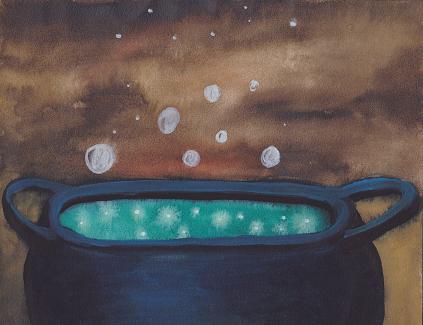 Then she heard a voice, but it wasn’t Yarlung’s voice anymore, it wasn’t even a man’s voice, but her own, and she heard what it said very clearly. “Ilan my dear, know thyself and you will know the stars, the gods and the Universe…” 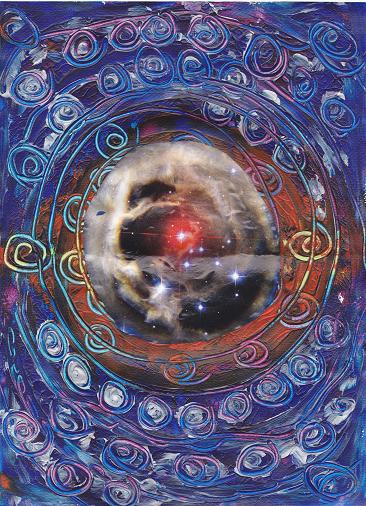 Next thing she knew, or rather felt, is a mouthful of sand and someone talking at her side, and it wasn’t happy. “Disgusting! I hate it when he does that!” “Where am I? And who said that?” Ilan turned her head towards whoever was talking but there was nobody except Tenzin who also had been sucked by the cauldron and was coughing and choking because she also got a mouthful of sand. “Maybe I was just imagining things…” she said, now disappointed.

“Well at least you’re not the only one to think so… ” continued the otter whilst she was getting rid of the sand on her fur.

Michaela Devi Genaine, Spain michaeladevi@hotmail.com Although I am of Swiss origin, I have been living in Spain for 20 years. I moved to this country with my family when I was 9 years old, and have since then been involved with a broad spectrum of alternative projects, as well as being a pioneer of homeschooling. I am currently living in the Prades mountains near the Mediterranean Coast. I practice sustainable gardening, ecopsycology, art and psychosynthesis. I am fluent in English, Spanish and French.
View all posts by soulportrait →
This entry was posted in Past Travellers and tagged Ilan. Bookmark the permalink.

2 Responses to Just her imagination?