Following breakfast,  I went out on to the Guild grounds. What was neat were the seasons. With so many powerful souls in and around the guild, the weather pretty much depended on how or what the majority of guild guests were feeling any one day. It could be spring one day and fall the next. And strangely, the vegetation followed.

There were several master gardeners tending the guild herb garden and vegetable patch. It was really a sight. Such beautiful colors and shapes. I have tried to capture its beauty here. Forgive me for my clumsiness in correctly portraying its beautiful energy. I loved to brush up against the thyme bushes or to rub the lavender and sage bushes. There were some herbs I did not recognize and others that I was too happy to see. There was a sort of solemnity communicated by this medieval garden, as if it gave refuge and solace to old souls.

There were many little alcoves to invite reflection. I found one in front of the borage and lavender squares and got to watch a splendid butterfly and bee dance.  I wanted to stay there and soak up the sun, it felt so good after being in the underground dampness. And so I sat and watched the world in front of me; the master gardeners working them alchemy in the gardens, the birds putting on their flight show for all serious spectators, my eye even caught sight of several industrious ants carrying bits and pieces of compost into their ant hills. The guild orchestra was practicing in the hothouse, where their concert was to be held. It was a glorious day. I had been moving through so many worlds and times that just sitting there taking it all in was so resourcing I dozed off on the bench under the mulberry tree. 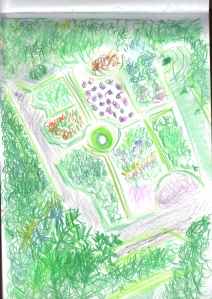 This entry was posted in Gena Lumbroso, Journey and tagged Hovovetaso, journey. Bookmark the permalink.

6 Responses to In the gardens…