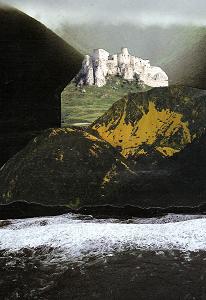 Note to the Reader:  Pagmoo = This is actually a PAGMU (Personal Anti-Gravity Mobile Unit) which is unofficially called a “pagmoo”. It creates a bubble around you and annuls gravity so that you can fly as a bird would, or rather swim in the air, or even walk if you want to see the landscape. It also, thankfully, has a “Forward” button, that blitzes you to your destination in, literally, “no-time”. You get a bit dizzy, like a tunnel through time, or a stargate, but you know, it´s an EMERGENCY device, so people are usually grateful for it.

This device – above all very useful for storytelling! – appears in the beginning of Vivian´s Journey.

…How cosy, thought Vivian, looking at the formidable rock walls surrounding the beach where she arrives, having pagmoo-ed from the Guild Halls.

Were the pagmoo coordinates the right ones? I should have arrived at Caer Abred directly.

She sends a thought to Corwin and right away she has a feeling of him, smiling amusedly.

Nobody gets into Caer Abred without the Master´s permission, not even you.

How charming, she sends back in the same way. Now what do I do? Will you come and get me with a horse-drawn carriage?

Now she hears a well-known, and well-loved, chuckle. No doubt about it, this is Master Blaise, her mentor.

Vivian! Come right into the Hall, I will open the magnetic Gates. We have something very interesting to show you! I will take over your pagmoo now, just close your eyes.

So she enters the usual kaleidoscope of dizzy colors, and a moment later, (or what seemed a moment), she opens her eyes and looks around her.

The huge stone castle hasn´t changed much since she was here last, training as a Druid under Master Blaise´s careful, if quirky, mentorship.

She is standing in an enormous hall, dark and silent, except for the fire crackling in a giant fireplace, at one end of the cave-like chamber.

My dear, I´m so glad to meet you again!

The man coming towards her with outstretched arms is indeed an imposing sight. Taller than average, with snow-white hair falling around his shoulders, and an equally white moustache and beard giving him the appearance of a very old person but with startlingly alive blue eyes.

She puts a hand on her heart, as the Elves taught her, and then takes a step forward into the man´s embrace.

Master Blaise, it has been such a long time…

Time is nothing, my dear, an illusion at best, he smiles warmly.

Corwin here, he indicates the other man, as tall as he is but much younger-looking, Corwin has been telling me about your adventures in Elvenland. You did learn some fantastic things, didn´t you?

My lady…he whispers with twinkling eyes.

A warm current passes between the two of them, at which Master Blaise smiles too.

I´m glad you two found each other. My best pupils…he says in his deep baritone voice.

Will you let me show you your rooms, my dear, says Corwin. Maybe you need to rest a while…

Oh no, Vivian answers. I´m ready to see whatever you found.

She looks at Corwin, eyes ablaze.

I left everything back at Guild Halls in a hurry, it better be good!

We have been waiting for you, and dinner will be served shortly.

Oh, he adds, and we do have magnetic sound showers now. A delegation of Elves has taken over this… antiquity, he makes an ample gesture to indicate the monumental hall, and they have brought some rather necessary…mmm…improvements…

Psychosynthesis and Art.
View all posts by shakti →
This entry was posted in Past Travellers and tagged Vivian´s Vision Quest. Bookmark the permalink.