Travelling Trunk
https://travellingartistsguild.files.wordpress.com/2010/10/img_5085.jpg
This box is the item that teleports Jake to other stars, as well as containing objects.
For my travelling box I bought a box from a shop to decorate. So far I’ve only decorated the lid and I’m not sure if I will decorate the rest of it just yet.
First I cut a bit of gold wrapping paper for the “screen”. I also took some futuristic looking bits from magazines and glued them on. I also glued a column of little square mirrors to represent buttons. I then painted the lid green.
Then I took some 3D paints, of gold and silver, to draw symbols on the little mirrors and lines for circuit wires.
The sides have a colourful tartan type pattern, which I’m not sure at the moment if I want to paint over or decorate further. 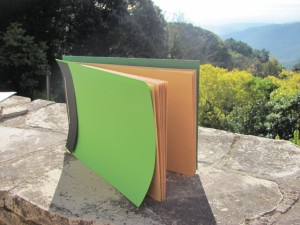 I sewed twelve envelopes together and then I took some coloured card to use as the cover for this booklet and sewed them, with a little margin of card where I sewed them. So far I’m not sure how to decorate it, but I expect the inspiration will come as I journey.

After struggling with a couple of dolls, not being sure what to do I was taken to a toy section in a shop and bought a doll. The only thing I’ve done is replace the head, since the clothes are fairly conventional, and quite Jake.
The head I made out of air dry clay, which I put on a hazel twig and this I put into the body. The colour for the head I used felt tip pencils that can be applied to most surfaces. As Jake journey’s and develops in Imagi-Nation this doll may find itself undergoing some changes.

Picture of Jake Fish
https://travellingartistsguild.files.wordpress.com/2010/10/img004.jpg
This was a picture I did a long time ago. Purely from colouring pencils. 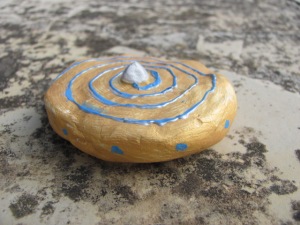 Jake will be teleporting to random destinations with his travelling box. Of course teleportation in Imagi-Nation is not a very safe process so some protection is needed in order to keep parts of your body where they should be and to have nothing growing where it shouldn’t! The PIPD (Physiological Integrity Preservation Device makes sure Jake stays the same shape.
I made it out of air dry clay. I tried to make a spiral out of the clay to go around the top but when it dried it crumbled off. Instead I used 3D paint to make the spiral stand out a bit, then I coloured it blue using a multi-surface felt tip.

3D Star Map
https://travellingartistsguild.files.wordpress.com/2010/10/img_5085.jpg
http://jakefishoutofwater.files.wordpress.com/2010/10/img_5087.jpg
Most people’s map are of landscapes and I did think of this, but on with a little inspiration I decided that Jake should travel the stars. I’d seen star maps form various scifi things but it wouldn’t describe much about the landscapes of planets and other places. But how to put them together?

So I took a box and painted it black, then marking stars on it with silver and gold. I’ve located the “Guild Star” on it but I’m not sure if or how to mark other places. Inside I will keep various mini-maps of the various places Jake vists.
Already I have made a map of the Guild Hall (using locations that Jake has already visited) using colouring pencils. It’s quite plain but if Jake looks around it more I may put in more details.

An important part of Jake’s story is the scribbles he made as a kid. I used my nephew’s crayons for this. Jake doesn’t see the image, but, if you look very carefully, something might strike you about it. And by the end of Jake’s journey he’ll have recovered his imagination enough to see what is there in plain sight.

This entry was posted in Journey. Bookmark the permalink.

3 Responses to Jake’s Things: Making of