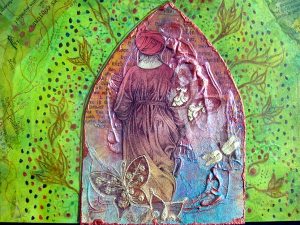 Time is not the constant phenomenon people think it is. Time ebbs and flows. It has flurries and maelstroms, shallows and whitewaters. Time has tripping currents and perilous undertows, meanders, and gushing falls. I have always known how to interpret the nature of a time, of a moment, of an age, and it has set me apart.

The equinox is viscous. Summer clings to the waning light while autumn reaches out to win a hold. For the briefest span, neither can gain the overhand. Time holds its breath. Then the movement commences, imperceptibly at first, and light gives way to darkness. Dawn arrives later each day, and the time for deep journeys can begin.

My journey began at a window, as dawn broke above the rooftops, as crows flocked and screeched and swooped in thick swarms across the sky. I stood like a shadow between the dim desk lamp and the dawn, and she appeared in the space occupied by my reflection. Neither of us spoke. The Guild Mistress had come to remind me of an older place, not so much a past as a parallel, and of a promise made to me in another order of time.

The Guild was my playground, an adventure-filled place for a curious child. I wandered freely along its corridors, exploring the veritable labyrinth of rooms, attics and workshops hidden within the guild walls. I watched, enthralled, as industrious Guildwomen — poets, potters, sculptors, painters, weavers, puppet-makers, calligraphers, seamstresses, carpenters, writers, glass blowers, goldsmiths, and all the others — worked to bring their creations to life. And I was captivated by the stories they told to each other of journeys through the Imagi-Nation and of treasures bought back in their hearts and minds, and of the contents of the trunks they kept in the Journey Hall.

Journey Hall lay at the heart of the guild buildings, indeed, it was the heart of the Guild, and it was magnificent. The hall was square, fully one hundred feet long and wide, and high as a cathedral. There was an ornate doorway at the center of each wall, and each door opened onto a cloistered walkway at the end of which was another door in the outer wall of the guild: one door that opened to the north, one to the south, one to the east, and one to the west.

Inside the hall, tiered galleries ran around the walls, which were lined with shelves from floor to ceiling. The shelves were filled with the guild’s most valuable treasures: the Journeywomens’ travelling boxes. It was my delight, as a child, to climb the tightly winding staircases from one gallery to the next and wander along the rows to marvel at the boxes and trunks and panniers and all the other ingenious receptacles created by the Travellers. Atop each box sat a doll of some description, and each box bore a plate with the owner’s name and the name under which she had made her journey.

On occasion, the Mistress of Treasures, who took care of the boxes, would allow me choose a box from the shelves. She would open it and show me the treasure inside. As she unpacked each item, she would explain how it had been made and its meaning and tell me about the artists who had created them. So it was that I learned the stories of many of the Travelling Artists and of the maps and the Imagi- Nation and of the duty of artists to journey and explore and share their stories with each other and with the world.

I wanted nothing more than to be a Travelling Artist, too.

Most of all I liked to sit in the uppermost gallery, directly beneath the stained glass cupola that throned above the Journey Hall. From there I could watch as the sunlight cast dappled patterns on the polished wooden floor far below. Only the center of the cupola was clear glass, and through it a shaft of bright sunlight shone down onto the compass in the center of the floor.

The compass was an intricate inlay, made of rare colored woods, gathered from all the known realms of Imagi-Nation. At her Going Forth, each artists would stand at the center of the compass while the Chanters incanted the ancient words that would send her into a trance. Then the Chanters would recite the Travelling Tale in a strange language that felt soft and light, like gossamer wings. Only those who had travelled knew what the words meant, and they told me that the words were different for each traveller, because each of them received her own story as a Going Forth gift. When her story had been told to her, so they said, the artist would know through which door she must leave the Guild to set out on her path.

When an artist went forth, her doll remained behind and was placed in a niche close to the door through which she had left. That way, the Guild Mistress told me, part of each Traveller would always remain in the Journey Hall, and the artist would know to return. The Mistress of Treasures and the Guild Mistress took very good care of the dolls.

All my life, I have not forgotten one of the many times I stood at the centre of the compass, eyes closed, arms stretched wide, turning slowly and hoping for some intuition, some inkling of what it might be like to be the one setting out on her journey.

“You will travel, Alba, but not for many years to come.”

I opened my eyes to find the Guild Mistress watching me.

“I promise you that, Alba. I shall call you, one day.”

For some reason I could not fathom, she sounded sad.

I had not expected to have to wait for decades to pass between her promise and its redemption, but so it was. All that remained for me to do was to bring various affairs in order and wait for the door to the Imagi-Nation to reveal itself to me. I did. It did. I crossed the threshold and trod out along the path that would take me back home to the Travelling Artist’s Guild, in the knowledge I would soon be a Journeywoman at last.

Some people would see only a middle aged woman, albeit fairly well preserved, but in reality, I'm an English writer and artist (order exchangeable) living in Germany. I'm a blended learning specialist, graphic designer, and train adult education teachers, when I can find the work. There is far, far more to me that even that, of course, but discovering that is the journey you can undertake by reading this blog.
View all posts by artrites →
This entry was posted in Journey and tagged Alba. Bookmark the permalink.

8 Responses to Alba – The Equinox